Honey bee farming is worldwide considered a handy source of income generation, with little financial and technical input. The HAI is currently running 3 projects at Dhirkot and Chihala (AJK), respectively, which have shown tremendous results. Apart from due technical training, the beneficiaries were provided with honey bee boxes and safety kits to run their projects on scientific basis, respectively.

Each beneficiary of the project is earning not less than Rs. 0.2m annually at the moment and is all set to enhance it gradually. The quality of the honey produced at these farms was highly acclaimed at a national event organized at the National Agriculture Research Council (NARC) back in 2013.

Encouraged by the success of the pilot projects, the HAI has planned to promote honey bee farming at a wider scale in AJK and would encourage womenfolk in particular to come forward and adopt it as a highly rewarding professional. The HAI-Pak is also in negotiation with the concerned state department in AJK to popularize this profession in the area.

Human Appeal believes that agriculture holds the key to uplift the economic status of marginalized people in different parts of Pakistan. To create awareness on the real potential of agriculture and encourage farmers not shy of exploring unorthodox options, it regularly organizes different activities, which are participated by people coming from different walks of life, including government departments.

During the quarter under review, Human Appeal organized a Kisan Mela at Dhirkot, Azad Kashmir, to provide an opportunity to the farmers to showcase their near-organic products at a bigger scale. As many as 40 farmers, including women, participated in the event and displayed their products, including but not limited to, honeybee, maize, wheat, carrot, radish, garlic, spinach and cabbage. 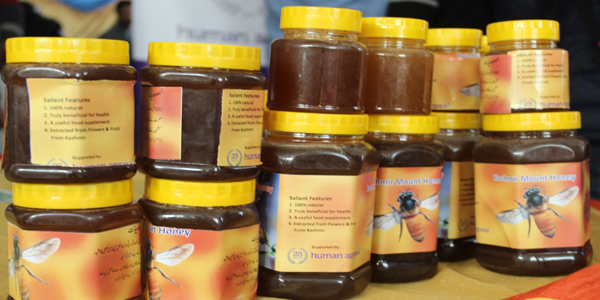 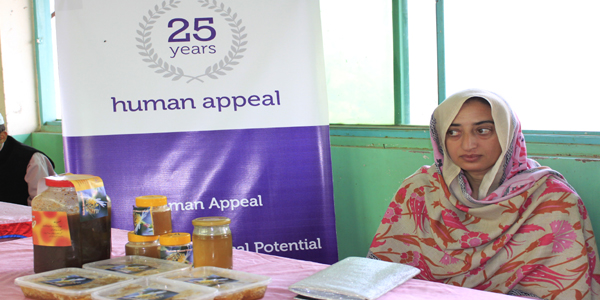 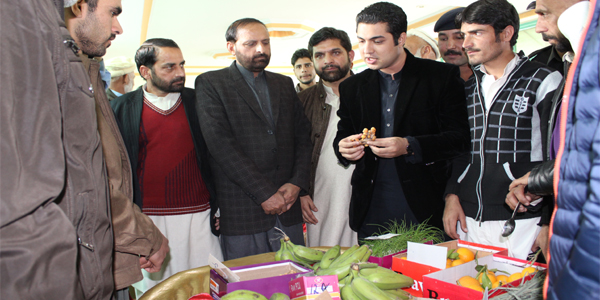 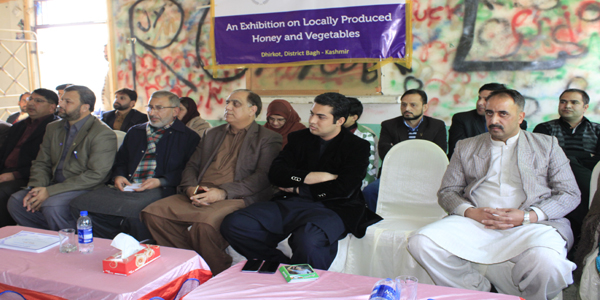 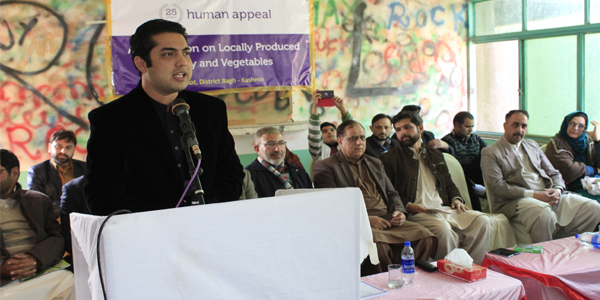 Trained and supported by Human Appeal, the farmers through their products sent across a powerful message that the area had a huge agriculture potential and, by turning to it, the local people could enhance their income, significantly.

It was noted that the quality and size of the products displayed were far better than the ones available in the market. As guided, the farmers revealed that use of organic material, such as manure, kitchen waste and ash, helped them tremendously to enhance the quantity of their crops.

Honeybee stalls attracted special attention on the occasion. Visitors thronged them and largely appreciated the quality and aroma of the product. The farmers disclosed that, besides meeting local demands, some of them had already started exporting the product to the Middle Eastern countries in particular at very profitable prices.

A large number of people, including government officials, civil society workers and media persons, also participated in the mela and appreciated Human Appeal for arranging the event. They believed that, besides providing them an opportunity to purchase quality a products, the event was a strong reminder to them to make the best use of land available to them.

Human Appeal is currently running several kitchen gardening, honeybee and tunnel farming projects at Dhirkot, helping a large number of people to enhance their income, significantly. Apart from training and guidance, they were provided with seeds, tools and special kits to try their luck in the new-found filed.

Famous anchorperson and brand ambassador of Human Appeal, Iqrarul Hassan also visited the event and showed keen interest in various products. He visited each and every stall and exchanged views with the farmers and hugely appreciated their efforts. 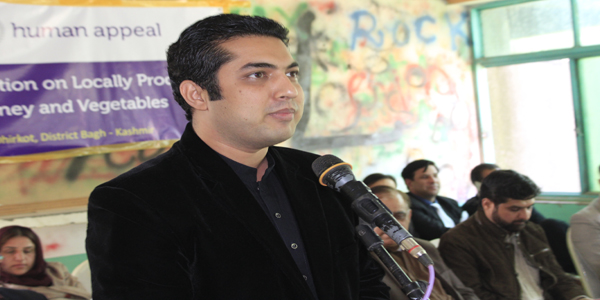 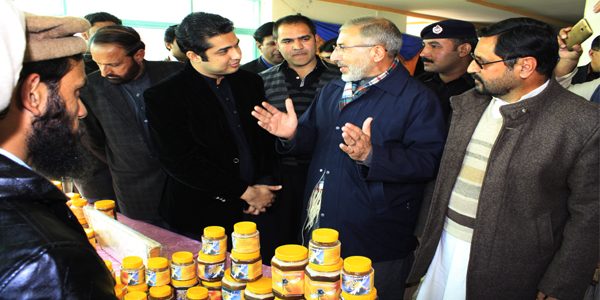 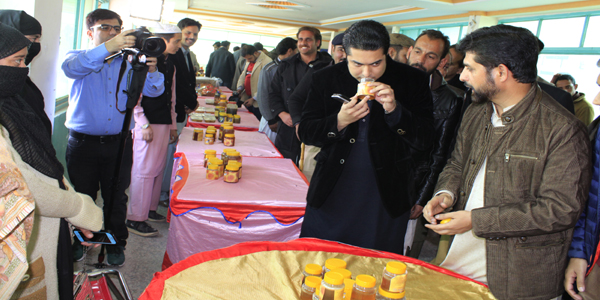 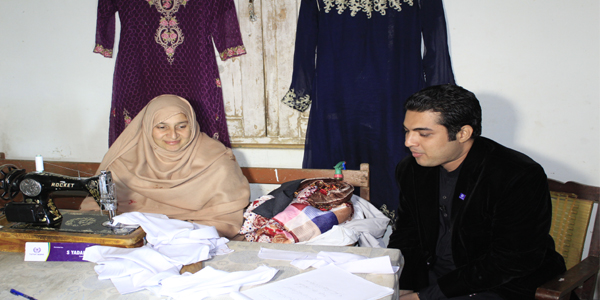 Paddling a futurist approach, Human Appeal International, Pakistan (HAI-Pak) is currently engaged in various activities to promote organic farming in Pakistan and is thrilled by public interest in this arguably unexplored area and the results achieved so far at gross roots level.

Providing an opportunity to farmers to showcase their products, the HAI-Pak organized a Kisan Maila at Dir Kot, Azad Kashmir (AJK) in which 60 farmers, including women, displayed their products - honey bee, vegetables and fruit - and were thronged by visitors. Radiating benign smell, fresh products mesmerized the visitors, making them show extra interest in understanding what organic farming stands for and how come they try their hands on it. 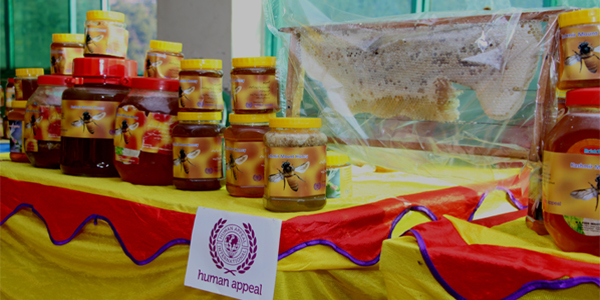 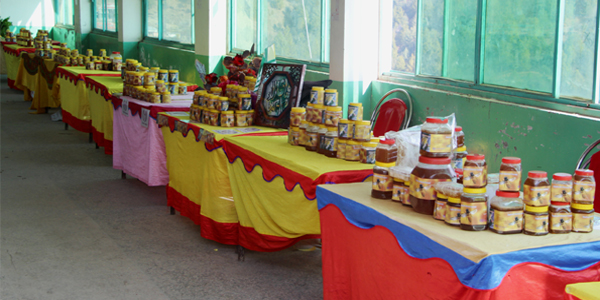 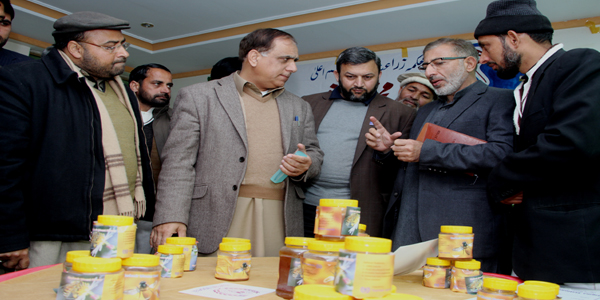 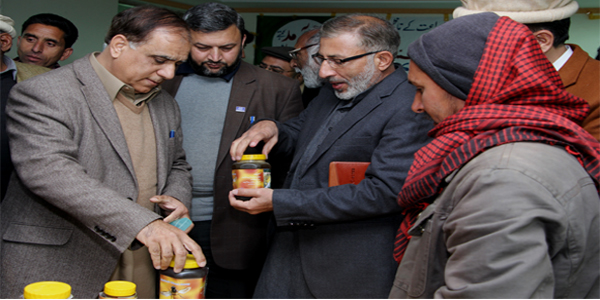 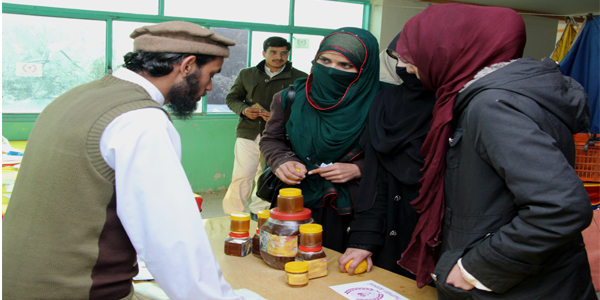 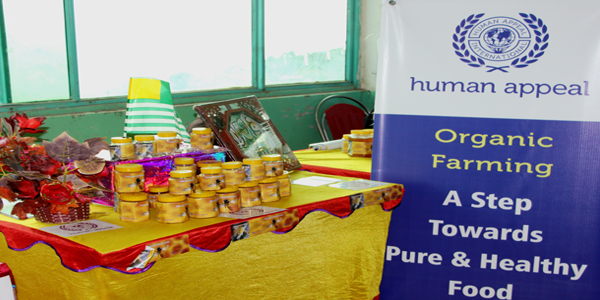 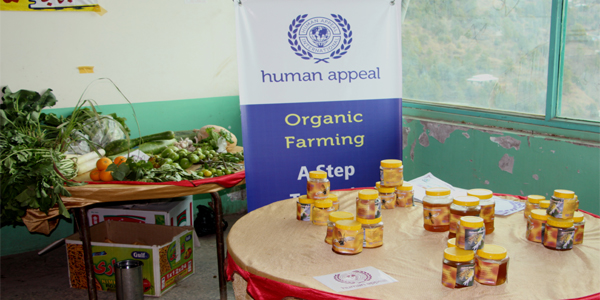 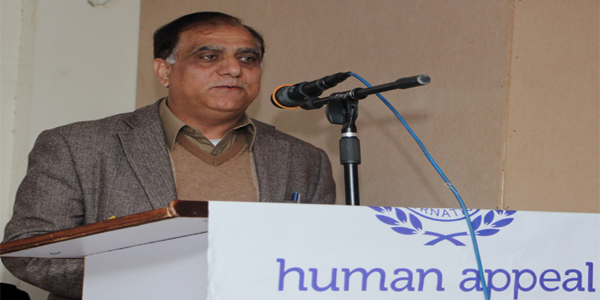 While appreciating HAI-Pak for taking the initiative, Dr. Muhannad Bashir Butt, Director General Agriculture Department, AJK, reminded that organic farming held the key to a healthy society. The world has finally realized that use of pesticides and chemicals to obtain enhanced production is in fact playing havoc with the health of consumers and hence needs to be discouraged at every level.

As chief guest, he also distributed certificates of participation among farmers, in addition to administering oath to the office bearers of an association created on the occasion to promote organic products in AJK.

Human Appeal International, Pakistan believes organic farming has a huge potential in Pakistan and needs to be exploited fully to make inroads, especially, in international market, which is fast expanding in view of growing awareness about the peals attached with the use of inorganic products. The HAI-Pak plans to help farmers build linkages with global market for enhanced income generation and projection of a soft image of Pakistan worldwide.

Honey bee farming can change you lot, just give it a try!

A clear vision coupled with a rock solid determination holds the key to success and glory. If you are ready to tread the un-treaded path, nothing can stop you from running with flying colors, setting a new trend for all those to follow who really yearn for marking an impression on the society they belong to.

Raja Manzoor Khan is a case in point. 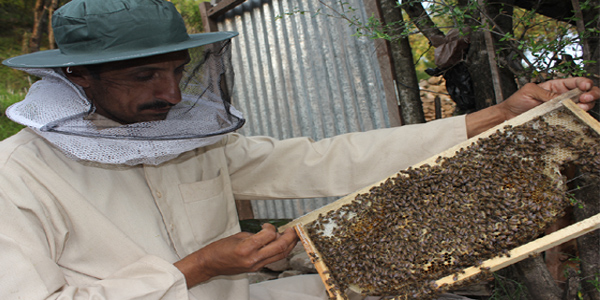 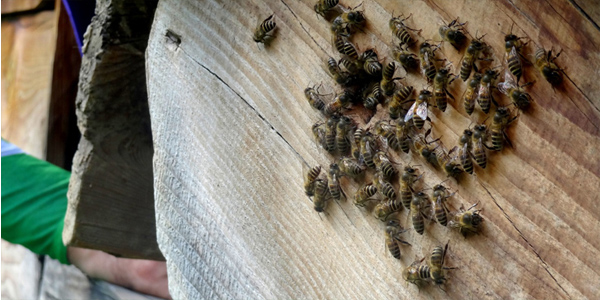 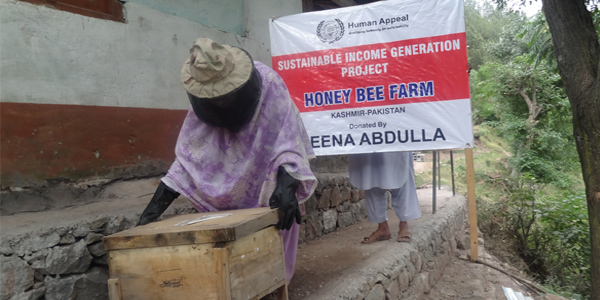 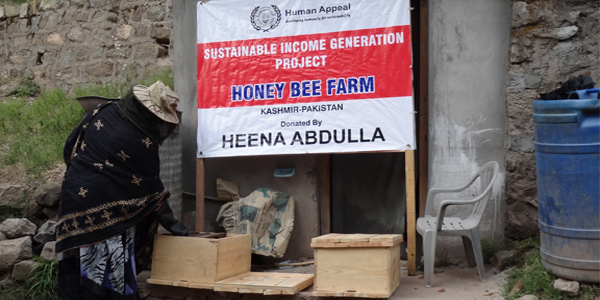 This year he earned Rs. 0.3m by selling quality honey and is predetermined to double his profit next year. How did it all happen, makes a quite interesting reading

He was a shopkeeper at a distant village Mallot, Azad Kashmir (AJK), and was hardly able to run his family, comprising eight persons. Lack of resources never allowed him to provide formal education to his children who spent most of their time wandering in the fields. The situation was so appalling that his wife and parents finally succumbed to it and got bed ridden. Worst, fingers were raised most often than not at his children in case anything went wrong in his vicinity.

Agitated and disgruntled, Manzoor was fast losing hope when he was introduced to an HAI-Pak team, which was providing honeybee farming training to select people at Bagh. Grabbing the opportunity with both hands, he joined the short training course and rose with a firm commitment to himself to excel in this newfound field and break the shakes of poverty at every cost.

It was late 2011 when he formally started his business and dedicated himself to it to the surprise of his near and dear ones. Meanwhile, he was facilitated by the HAI-Pak to obtain advanced training in this sector in 2012, besides participating in a number of high profile workshops, refresher courses and seminars. Today, he owns 15 honeybee boxes and running a successful business. His two children are going to school regularly while his eldest daughter lends a helping hand to him in his work. Recently, Manzoor represented the HAI-PK at a mega event at National Agricultural Research Council, Islamabad. The event was also participated by a number of delegates who thoroughly appreciated the achievements of Manzoor in such a short span of time.

He is now also serving as the master trainer with the HAI-Pak to promote honeybee farming in AJK and has conducted several workshops and introductory programs at Athmuqam and Forward Kohota. He intends to develop this sector as an industry in AJK and is quite confident of his success in this regard.

While appreciating the role of HAI-Pak in launching various income generation programs, he underlines that "the AJK is blessed with an exceedingly conducive climate for initiatives such as honeybee farming. It can provide livelihood to thousands of people at their doorstep and the efforts by HAI-Pak in this regard are bound to have a ripple effect in coming days". He believes that the government should also take a leaf from the HAI-Pak's experience and promote this business on a wider scale.

Encouraged by the success of pilot projects, the HAI-Pak has decided to promote honeybee farming in Azad Kashmir (AJK) on a wider scale to generate economic opportunities for needy people. A rigorous exercise was conducted to assess the potential of this business in three districts namely Muzaffarabad, Bagh and Poonch.

It was discovered that a large number of people were deeply interested in making honeybee farming their full time profession and many of them were already doing it on their own, though without any proper guidance or support.

The HAI-Pak plans to hold training workshops and courses for such people before providing them the required number of boxes to start the business formally. Needless mentioning that one beneficiary of the HAI-Pak income generation program, earned approximately 0.3m by selling quality honey this year.